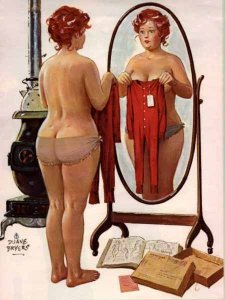 I am really feeling the sting of woman on woman deprecation today.

And in the name of feminism no less!

First there was the article on how straight feminists hate lesbian feminists, (which, thankfully, was sufficiently rebutted by others’ comments) and then almost immediately after, I came across this post condemning women that are fond of pin-ups and/or like to dress up in the pin-up style. The following words are in response to the currently trending popularity of this pin-up character from the past, “Hilda” (pictured above).

Here’s what the post said (taken from this article):

“We currently live in a “pin-up” culture where women are only granted visibility when they display their bodies for public consumption; therefore, most women are groomed and disciplined from young ages to have pin-up ready bodies.

That’s what white-centered postfeminism is all about. A vision of sexual liberation that hinges on the male gaze and male approval. Now we can sit here and have that long, uncritical, derailing conversation about women who “choose” to strip and enjoy being “pin-ups”; but I’m going to spare myself a stroke and move on, because talking about “individual agency” is irrelevant when we’re discussing hegemony.

If we have a superficial surface-level understanding of oppression, then we will have superficial surface-level solutions. It’s that simple. Posting up any sized sexualized woman on your wall, originally created for men, won’t solve the reality that systemically, women are degraded, dehumanized, and are robbed of understanding their sexualities organically. It also teaches men that sexualizing “diverse” or “alternative” bodies is progressive and therefore acceptable.

Additionally, as I reiterate all of the time, the idea of publicly displaying your sexualized body is largely a white enterprise and endeavor. Black women are not granted the same privileges when we showcase our bodies because we’re viewed as public property; evidenced through our high rape rates and low pay-rates in spaces of sex work, etc.”

I think it goes without saying that I do not like this attack on pin-up girls/pin-up culture.

More importantly than what I do, or do not like, however, is the fact that saying, “talking about “individual agency” is irrelevant when we’re discussing hegemony,” ignores the very multi-faceted world of pin-up culture as well as the individuals participating within it— which is relevant. (Since when is talking about the parts of a picture irrelevant to the picture as a whole?) While the author’s critique invokes the rhetoric of “hegemony,” he or she is creating a hegemonic feminism of their own, in which all other feminists who like to participate in and enjoy pin-up culture are castigated.

The feminism I learned about was more accepting than this. While I do understand the perspective from which this author is writing (I did study gender politics at Berkeley after all), I choose to not make such sweeping generalizations about people, or groups of people (except Republicans, of course… Just kidding! I actually do really like Meghan McCain, so there). To imply that just because someone likes to wear pretty dresses and curl their hair, they “have a superficial surface-level understanding of oppression” is extremely insulting.

For me, the recognition of various forms of subjugation (via studying feminist theory) has meant the ability to see through such cultural patterns and influences, actively resist them, and perhaps even become self-definitional if such a thing is possible. Just because I indulge in pin-up fashion on occasion does not mean that I don’t know the history behind it, nor does it mean that I don’t understand the gendered, sociopolitical implications of it. And I’m willing to bet that I’m not the only one (okay I know for a fact that I’m not). As a matter of fact, there is a vast array of modern day pin-ups out there that take the original concept of pin-up beauty and culture, and turn it on its head, thereby subverting the entire set of traditional notions behind it— the very sexist “white enterprise” that the above author is citing. Just look at the Suicide Girls (started by a woman and still largely run by women) which, may I remind you, began as a counterculture of “alternative” beauty.

Moreover, my brand of feminism is about choice. Just as I’m not going to castigate any woman, feminist or not, for being a stay at home mom, I’m also not going to do the same to a woman that chooses to delight in her femininity through replicating pin-up looks. Not only does it not, in my opinion, seem in keeping with the basic tenets of feminism (though, yes, I know, there are a myriad of different feminisms) but honestly, it’s also just not polite.

Error: Twitter did not respond. Please wait a few minutes and refresh this page.