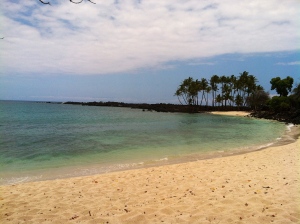 As some of you may or may not know, one month ago I had my wedding reception, followed by a week of work, then 16 days in this tropical paradise within the U.S. we call Hawaii.

A few interesting factoids about Hawaii:

A couple of particularly interesting facts about that last point (taken from wikipedia):

*bold and italics added by me for emphasis

For most of us here in the United States, we will learn about colonialism throughout primary and/or high school (i.e. K-12) as historical fact— something that happened in the past— which is, of course, true. However this does not preclude the possibility of extant colonialism. This does not mean that we live in a post-colonial world. Far from it. I believe Hawaii to be a demonstration of that fact. After all, one of the former Big Five powerhouses (what some would call the former oligarchy of Hawaii), Alexander & Baldwin,  still oversees sugar cultivation in Hawaii, is still one of the largest landowners in the state, and owns dozens of income properties in Hawaii as well as the mainland.

My husband and I spent the bulk of our honeymoon (13 days) on Hawaii’s “Big Island” (the island actually named “Hawaii”). It’s the largest and least touristy of all the islands, which can also mean a higher local to tourist ratio. It was so interesting to be in a U.S. state where English was not the dominant language. Over the loudspeaker in a grocery store I heard Hawaiian. Between vendors at the farmer’s market I heard Hawaiian. Walking down the street, (usually only between local adults but not so much with the children) I heard Hawaiian. We rented a car so as to be able to travel all around the island, and naturally, I wanted to listen to the local radio station instead of the ol’ regular pop/rock you hear everywhere else (“Hawaii’s native island music” as they announced on the radio) and guess what I heard….

That’s right! A lot of great music. But also— yes— many songs sung in Hawaiian. Even more interesting were the many songs I heard that sang of Hawaiian history: songs about King Kamehameha, Queen Liliuokalani, the history and tradition of respecting their land with the utmost reverence, and how they lost their right to the land due to the power and influence of the Big Five.

As one DJ said at the end of a certain song [of one of these historical ballads], “That was [musician’s name] with [song name] singing about King Kamehameha… and yes, as __________ said in that one right there, let us ‘never forget, never forget’…” While I did not encounter a single unfriendly person, local or otherwise,throughout my vacation, hearing this on the radio definitely gave me that unmistakeable feeling of being a tourist on foreign land, perhaps somewhere I wasn’t meant to be.

In addition to this contrasting language and music, there is also the overall difference of lifestyle, values, tradition, all that constitutes the very fabric of culture itself. People there will call friends (or even customers…?! I observed this in a radio shack store between a salesperson and very elderly customer) “uncle” or “aunt/auntie” as a term of endearment. (Which is also, oddly, much like Spain where people call one another “tia” or “tio,” Spanish for aunt and uncle, respectively)

Hitchhikers also abound on the Big Island. When my mom first told me that she picks them up once in a while (she has what I call a “hippie shack” over there- solar powered, no plumbing, grows a lot of her own food) I flipped out, naturally. She said, “Oh but everybody does it. Everybody hitchhikes, and everybody gives them rides. It’s fine. Besides, I always have them sit in the bed of the truck back there.” Needless to say, this did not assuage me. I told her to knock it off and that if she’s going to do that she had better at least have some pepper spray or mace on her. She gave me the “ok, but sheesh you really just don’t get it” look and that was it. Well by the end of our 13 days there, seeing hitchhikers almost on the daily (and quite frankly, yeah, they all looked harmless) I got it.

It’s about community and trust.

I thought about reading the U.S. Constitution side by side with a Native American tribe’s constitution for a class at Berkeley (sorry, I can’t remember which tribe, it was 4 years ago). The stark difference between the two, other than the central issue of property, was trust. Ours was based on an implicit lack of it, while the Native Americans’ was based on an implicit understanding of it. Hawaiians, I believe, are culturally operating on a similar level: everybody hitchhiked, and everybody picked up hitchhikers, because their culture is one of trust, and let’s not also forget, one of respecting the land and only using what is necessary, thereby making hitchhiking actually quite conducive to environmental values as well.

Such thoughts would, on occasion, bring me back to why I was there in the first place.

I was on my honeymoon.

I had never been on a trip outside of 4 days tops, in Las Vegas, with my now husband. We were now on an island, with just each other, for 16 days straight. Of course it was fun and amazing and all of that, but it was also a learning experience (and not just sociologically speaking). It was like an exercise in team-building. And having to really, really, confront where you may be falling short on this team, then figuring out why, and then figuring out how to go about fixing it. An implicit understanding of trust is an important thing, both socially and personally.

Even more important is knowing when and how to trust yourself.